Excerpt: “After all, Frampton’s central ambition in Filmosophy is to demonstrate the ways in which a film can be said to be thinking, so that film can be thought of as thought itself. And there, in the The Pervert’s Guide to Cinema, sits Žižek, thinking – and, even better, talking – from within the space of the films he cherishes.”

Excerpt: “The value of public service, and by extension the work of public servants, appears to be simultaneously culturally venerated and under attack economically in these times of political turbulence and austerity. While citizens’ relationships with politicians have become strained and remote, both factual and fictional representations of the working lives of police, fire crews, health workers, prison officers, and even soldiers ‘mucking in’ during national crises, have come to dominate television screens.”

Torlasco’s “Philosophy in the Kitchen”: image, domestic labor, and the gendered embodiment of time

Excerpt: “An archive of images set to a different beat, ‘Philosophy in the Kitchen’s’ reappropriation of cinema footage spans from as early as 1936 with Alfred Hitchcock’s Sabotage to the period of the post French New Wave with Claude Charbol’s film La Cérémonie (1995). Further, it incorporates classical narrative dramas, such as Jean Renoir’s La Grande Illusion (1937) and radically experimental films, such as VALIE EXPORT’s Unsichtbare Gegner (Invisible Adversaries, 1977). Yet these images are not shown in historical or stylistic succession, they are instead revealed in a synchronic, visual, and thematic relationship.”

The paradoxes of precarious labour in observational documentaries today

Excerpt: “Given the mutations in present-day audiovisual production and the arrival of various competing modes of image making, why have filmmakers now rediscovered the usefulness of an observational approach and its attendant focus on ‘person-sized spaces?’ How should we interpret such supposedly anachronistic phenomena? One is tempted to simply link these developments to a modern-day obsession with documenting everyday life on various social media platforms, but the current pervasiveness of observational documentary production is at odds with prevailing understandings of the twenty-first-century’s new media regime.”

Phantom ladies: the war worker, the slacker and the ‘femme fatale’

Excerpt: “To the extent that the femme fatale can be said to exist at all, she is anything but the independent working woman of wartime. On the contrary, the women identified as classic femme fatales are, almost without exception, examples of the ‘kept woman’, who had come to signify decadence and corruption during the war years. If it is often claimed that a campaign directing women back to domestic life began in 1944, it reversed an even more insistent campaign to encourage women into wartime jobs in the first place, a campaign that not only presented the female war worker as positive but accused ‘any woman who was not working of being a slacker’ and hence a threat to the war effort (Melosh 1993, 190).” 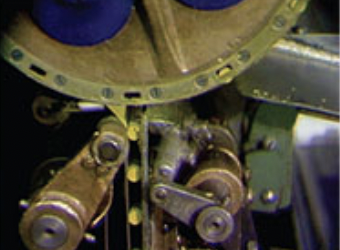 The process genre: cinema and the aesthetic of labor (Duke University Press, 2020) by Salomé Aguilera Skvirsky

Excerpt: “Understanding labor capaciously, as ‘form-giving activities’ (32), the introduction argues process films’ aestheticization of labor is not necessarily bound to exploitative capitalist production, but offers a flexible form suited to exploring different kinds of knowledge and, via its haptic depictions of material processes, bringing viewers into closer contact with their sensual and social worlds.”

Excerpt: “Using heterotopic analysis as a methodological nexus with which to challenge the notion of cinematic space as smooth, coherent and unified, Chung probes an amalgam of filmic artifacts and methodologies to demonstrate that cinematic space is, indeed, a multilayered assemblage consisting of mediated materialities and composite physical locations. Accordingly, this multiplexed condition is exacerbated by transnational capitalism’s global pipelines. “

On ‘The Process Genre’: An Interview with Salomé Aguilera Skvirsky

Excerpt: “Because I came to the process genre through Latin American films from the late 1950s and 1960s, films that had not been talked about as being processual or as being about production processes, processual representation felt like a discovery to me. I think that was the virtue or the possibility of coming to this phenomenon as an outsider; I didn’t go through the kind of usual channels and read the usual things, so things looked different to me. I watched films like Mimbre (Sergio Bravo, Chile, 1957) and Aruanda (Linduarte Noronha, Brazil, 1960) and Araya (Margot Benacerraf, Venezuela, 1959) and I felt mesmerized; my ears tingled and my toes floated. These films reminded me of other material I had seen like Robert Flaherty’s Man of Aran (1934). “

Excerpt: “First, the scandal that Starmer and Johnson were discussing at PMQs concerned former ministers or civil servants employed to lobby government on behalf of commercial interests. Expressly, it was sparked by former prime minister David Cameron’s lobbying current ministers on behalf of Greensill Capital for access to a Covid-related government-backed loan scheme. Much of the media commentary invoked the principles of integrity and honesty in public service, especially as no ‘codes of conduct’ were said to have been broken officially. “